With people pickling at home at record rates and the industry of fermented foods growing and growing, it’s a good thing we sell vinegar by the drum and tote! Take pickled cucumbers, for example. According to the U.S. Census data and Simmons National Consumer Survey (NHCS), 239.17 million Americans consumed pickles in 2017. This figure is projected to increase to 245.56 million in 2020!

So what’s so special about pickles? In short: Everything. Americans are smitten with pickles. Pickling is not just for cucumbers anymore. A staple ingredient of European, Asian, African, and Middle Eastern traditional cooking, pickled and fermented food items are only in the last few years making their mark on American cuisine. Integrated into sides – and even cocktails! – in-home and in-restaurant pickling programs experiment with standard vinegars, but are frequently accented with nontraditional pickling ingredients and flavors to create unique small-batch treats for patrons.

Between a Pinterest fried pickle recipe that has been repinned and saved over 100,000 times, and dill pickle flavors showing up in everything from fast food slushies and soda, to dips, potato chips, and even beer, it seems that the trend for pickled and fermented foods is on track to grow, not shutter through 2020, which is good news for Bremer customers who value our vinegar quality and selection.

Wholesale Vinegar for Your Pickling Needs

We have all the wholesale and bulk vinegar you could want: White distilled vinegar, apple cider vinegar, and other varieties are ready and in stock for pickling your own craft accoutrements to integrate. Contact us when you’re ready to order! 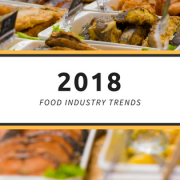 Every year, analysts from various markets put together lists upon lists of what is new in food and beverage for the upcoming year. We’ve taken a cue from them to make a master list of the bigger trends and predictions that will shape consumer behavior.

Buzzword bingo over here. Mindfulness has officially reached mantra status, which probably means that too many people are talking about it. When it comes to food, mindfulness is not quite the Zen experience you were thinking it would be, but more so “the quality or state of being conscious or aware.” Driven mostly by Millennial buyers, this consumer attitude is meant to truly understand everything possible about a brand, from ingredients to sale, as Millennials are most apt to purchase based on brand value alignment.

We’ve officially moved on from “farm-to-table” into a more ethical awareness around food waste and packaging waste with a demand from consumers to understand exactly how it is that companies are using their resources. This has lead to more packaging containing words like “biodegradable” or “upcycling” to communicate the dedication of a company to sustainability efforts.

Maybe it’s the Whole30 impact on marketing, or maybe people really understand “from scratch” initiatives or a slower food movement, but processing technologies are increasingly being used for marketing purposes. Claims, such as “cold-brewed” or “sprouted,” are appearing on labels to promote the products’ health benefits. We chatted earlier in the blog about the anti-GMO movement in regard to sugar, and this is a direct result of that knowledge or crowdsourced concern for understanding how food is handled on a larger scale.

It all starts with the field where our food comes from. With the world’s population still growing, and over 65% of us living in urban areas, our limited resources like soil, water, and land are all in a vulnerable state. Much like we mentioned in the positively processed and full circle initiatives points, the movement for a more direct model of farm-to-consumer as it relates to nature has been increasing. As younger farmers move into the field, and technology plays more of a role in everything from planting to harvesting, we are entering a new era of agriculture which will impact everything.

Fortunately, this is not about political parties. Food policy is a bipartisan issue with rules and regulations being built and dismantled as trends emerge and new normals are established. With conversations swirling around things like climate control, immigration, importing/exporting, farming, and the environment, food politics will be a topic that is continually at the forefront of our economy.

We’re committed to assisting you with your wholesale ingredient needs, no matter the shifts in consumer demands. Contact us today for a quote for your business as it adapts to the changing market.

The talk about GMO (genetically modified organism) and non-GMO foods is only getting louder, but unfortunately, a lot of talk stems from, and thus perpetuates, confusion. Consumers typically aren’t sure exactly what GMO foods entail and, likewise, how non-GMO foods differ, but they do tend to assume non-GMO foods are better for them.

Does this indicate a trend or a shift? Recent evidence is pointing toward the latter as consumers in all aspects of life are demanding to know more about everything. Especially when it comes to what they eat, they feel food producers and the FDA owe it to them to be transparent about what’s being sold.

At Bremer, we’re fielding and filling a lot of requests for non-GMO cornmeal and corn sweeteners, and it’s no surprise: as consumers demand more non-GMO products, they’re especially focusing on snacks. Of the total United States product launches from 2000 through 2014, more than half fall into the category of snacks.

Consumers want to understand more about what they’re buying, and they’re putting the onus on food producers to educate them. Still, consumers expect transparency while still being able to count on a reliable, sweet snack when they want it.

Non-GMO sweeteners aren’t limited to snacks, of course. Dairy, bakery, sauces and juice drinks make up the other near-half of new product launches, and those foods need cornmeal sweeteners, too.

If you’re looking to place an order for the highest quality non-GMO ingredients, talk to us today. We’ll get you what you need on time, every time.

Food-manufacturing and food-processing companies are pushing to rid their products of genetically modified organisms due to increased demand from customers. As consumers seek healthier lifestyles and diets focused on natural ingredients, companies have had to adapt to keep their sales up.

For example, The Hershey Company announced in early 2015 they would be removing GMO ingredients from almost all its products. Most notably, Hershey’s Kisses and Hershey’s Milk Chocolate Bars are no longer made with genetically modified beet sugar. Rather, they are being made with cane sugar.

Hershey’s isn’t the only company ridding their products of GMOs, but they are the most notable. While they haven’t yet committed to shedding GMOs from all their products, that point appears to be coming. Consumers are demanding it, and consumers usually win.

Currently, most of the sugar grown in the United States is beet sugar, which can be genetically modified. In order to acquire non-GMO sugars, companies need to source internationally, with Brazil becoming a more and more enticing market.

Brazil is the largest cane-sugar producer in the world, although a lot of their natural cane sugar goes to create sugarcane ethanol (fuel), so they aren’t necessarily the largest producer of edible cane sugar. That could change, however, as more and more companies in the United States and elsewhere look to Brazil for the pure, non-GMO cane sugar.

What it Means for the Sugar Industry

Brazil has the perfect climate for cane sugar, which used to be the only type of sugar anyone wanted. Will their high level of production increase as more U.S. producers seek natural ingredients?

Or, will the beet-sugar producers in the United States start to remove their GMO crops and produce natural beet sugars?

The costs are generally higher with non-GMO ingredients, which means the price of cane sugar could climb significantly if companies look to source their cane sugars from Brazil and other foreign countries. Of course, there are costs to beet-sugar producers switching their business models as well.

With consumers demanding more natural ingredients, will they also bear the brunt of these price increases? In general, natural ingredients cost more, so it will be very interesting to follow these trends to see how the sugar industry handles these consumer demands.

We are committed to assisting you with your needs no matter the shifts in consumer demands. At Bremer, we carry both GMO beet sugar, and Non-GMO can sugar. Let us know what your consumers are demanding and how we can help.